How to drive and take a photo of your coffee. Lauren Drewes Daniels
Dutch Bros Coffee, which we’ll refer to as “Bro! Coffee” from here on out (keep reading), opened in Pantego (aka Arlington’s ticket trap) this week. This is only the second such store in North Texas, the other is on Custer Road in McKinney and it's collected nothing but five-star Google reviews so far.

If you're feeling left out, just wait. There will likely be one closer to you soon enough. The Oregon-based coffee chain is rapidly scooping up real estate across the country, apparently thinking it can give Starbucks a run for its money. Just this year they plan to open 20 new locations in Texas; locally that includes Euless, Arlington (proper), Princeton, Fort Worth, Plano, Garland, Richardson and Wylie.

This drive-thru-only spot is located on Park Row Drive less than half a mile from an-always buzzing Starbucks. Not that we keep score, but we do, and in the first few days the lines at Bro! Coffee have been consistently longer than Starbucks.

So, what’s this about? Well, first off, energy. Dutch Brothers Coffee’s shortened middle name is ironically on brand; not something that was likely intended when the Boersma brothers founded the company back in 1992. That’s called a fortuitous glance into the future. Or too much coffee.


The company even calls their baristas “broistas.” Not in a male-dominated way, rather in we’re serving you coffee, but we’re really here to party.

The Bro! Coffee drive-through is run with a Chick-fil-A-like proficiency but with Mavs ManiAACs commitment; while it’s hot out, it feels these are the cool summer camp counselor.

They ask how you're doing and it feels like they mean it. Menu suggestions are doled out like they know you better than you do. For every jab I offered, they had an easy come back. The first “broista” I ever met approached my car and asked “Is this your first time here?” and I said, “Yeah, what about you?” And he squinted in the sun, smiled and said, “Yeah, it’s my first time here too.” 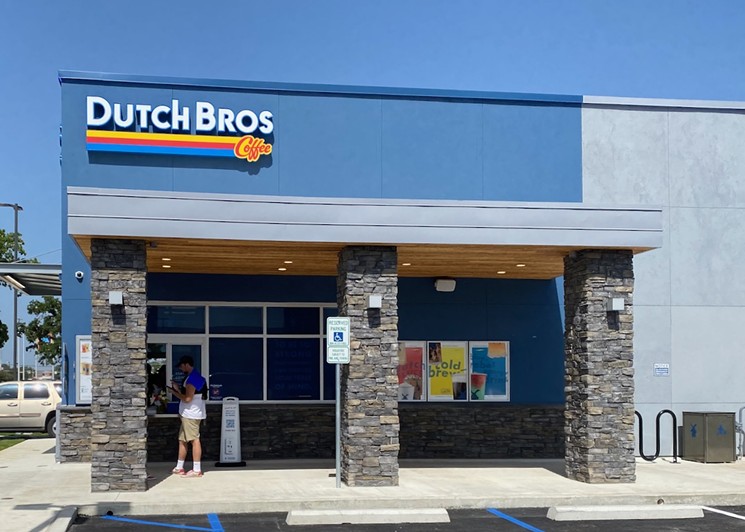 The new Dutch Bros Coffee is the new place to be in Pantego.
Lauren Drewes Daniels
Actually, it might have been his first day on the job. The second “broista” to escort my Toyota and I along the two-lane drive-thru, which is sort of like a moving meet-and-greet, told me he’s from Idaho and the company sent him here to work the drive-thru (in Texas in July) to train the new bros for five weeks. About half of the people working at this location were flown in from other states. It’s a traveling Camp Bro! and a touch of brilliant recruitment and HR strategy by these bean steepers.

As you get closer to the coffee window, or clubhouse, the music gets louder. The Beibs was bouncing overhead when I finally arrived. I bobbed in my seat a little, to which the broista bringing me my iced coffee answered by dancing. It's a bummer when you have to leave.

About the coffee: I still don’t understand the menu, and being a purist, I’m not inclined to learn their periodic chart of coffee elements. I just tell them what I want and let them translate it. (I still refuse to order a tall at Starbucks: it’s a small. No one gets to rename the sizing system we’ve all agreed to as a society.)

Anyway, I got an iced coffee with cream and a bit of creamy fluff on the top, which was like an oozy marshmallow. And I have to say, that was a dang good iced coffee.

On a subsequent visit, the first broista I talked to was also from out of state; he’d only been in town a few days and had no idea where he was or where he’d been other than he ate barbecue somewhere near the airport and couldn’t recall the name of the place, but it wasn’t great. (Ouch. That makes my heart a little sad. C'mon barbecue near the airport!)

Caroline Jones at her first day as a broista enjoying work way too much.
Lauren Drewes Daniels
When I made it to the little party shack window, while I waited for my Americano, the broista at the window asked me how I was doing and what I was going to do the rest of the day. I explained that I had to go write at a desk and mimed typing. Caroline Jones is actually from Arlington and this was her first day on the job. She was having way too much fun for the first day at a new job. She should have been crying in a walk-in or something, right? Doggit, I got in the wrong industry. I could be traveling the country eating marginal barbecue, partying with my bros all day.
KEEP THE DALLAS OBSERVER FREE... Since we started the Dallas Observer, it has been defined as the free, independent voice of Dallas, and we'd like to keep it that way. With local media under siege, it's more important than ever for us to rally support behind funding our local journalism. You can help by participating in our "I Support" program, allowing us to keep offering readers access to our incisive coverage of local news, food and culture with no paywalls.
Make a one-time donation today for as little as $1.

Don't Miss Out
SIGN UP for the latest food & drink news, free stuff and more!
Join Today
Sign Up
Become a member to support the independent voice of Dallas and help keep the future of the Observer FREE
I Support