The famous duo Hall & Oates took generations back to their childhoods at Dickie's Arena. Andrew Sherman
For kids of the 1970s and '80s, Hall & Oates was a band that was always playing in the background as we lived our lives, but never a band we focused on. We'd only become aware of them after we learned their songs had bad words. Maybe it was because it was a tad poppy for the spirit of the time and always on the radio or MTV. Twenty-nine of their 33 singles charted in the top 40 and 16 of those were in the top 10. The duo is undoubtedly deserving of their 2014 induction into the hall of fame, and that catalog of familiar songs now serves them well.

On Tuesday night, Hall & Oates electrified the crowd with their beloved hits on a tour stop at Dickies Arena in Fort Worth. Squeeze opened the show. Photographers were banned, which was a bit of a bummer, but Squeeze played their hits, including “Pulling Mussels (From the Shell).”
click to enlarge When Hall & Oates took the stage, the crowd got rowdy from the jump with "Maneater." The band rolled through some big hits with “Out of Touch,” “She’s Gone” and “Say it Isn’t So.” Daryl Hall started off on guitar but mellowed things out as he went to the grand piano. As he sat down, he had some issues with the microphone's sound.

“I don't do soundcheck," he told the crowd. "It always sounds so different with people in the room.”

After Hall's mic was dialed in, the show continued, bringing the crowd back in with “Sara Smiles.” The spotlight then shifted to his sidekick, John Oates. The pair closed the set with a rousing “I Can't Go For That,” which included some very cool back and forth soloing between H&O longtime saxophonist Charles DeChant and lead guitarist Shane Theriot. The band left the stage to a well-deserved standing ovation, returning for a four-song encore that started with “Rich Girl” and ended with “You Make My Dreams.”


Unsurprisingly, the mostly full arena was filled by an older crowd, and surprisingly, with teenagers singing every word and freaking out as hard as their parents. It made sense. Hall & Oates was the music a lot of us grew up to, and that tradition hasn’t changed through the generations.
click to enlarge

Hall & Oates brought their hits to Fort Worth on Tuesday.
Andrew Sherman
click to enlarge 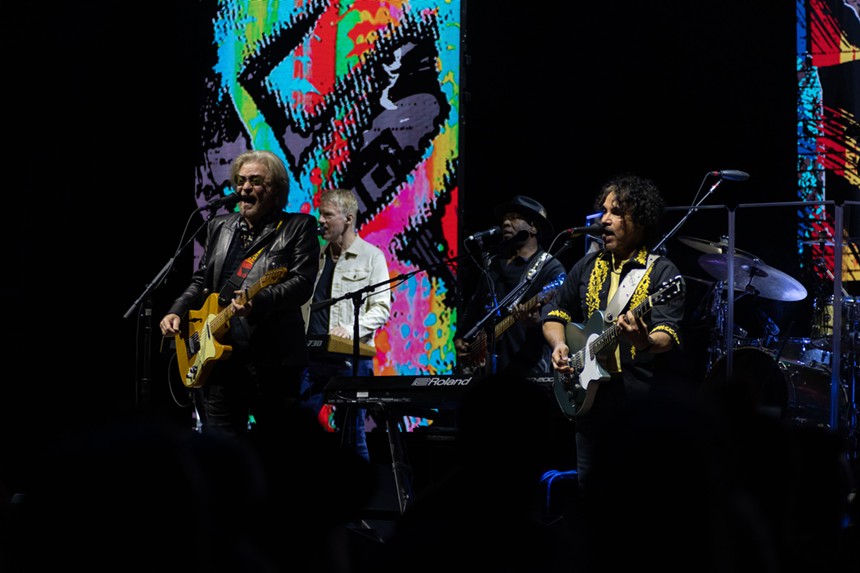 The crowd was just as excited to see Hall & Oates as the band was to see them.
Andrew Sherman
KEEP THE DALLAS OBSERVER FREE... Since we started the Dallas Observer, it has been defined as the free, independent voice of Dallas, and we'd like to keep it that way. With local media under siege, it's more important than ever for us to rally support behind funding our local journalism. You can help by participating in our "I Support" program, allowing us to keep offering readers access to our incisive coverage of local news, food and culture with no paywalls.
Make a one-time donation today for as little as $1.