Chris Stapleton performing at Dallas' Starplex Pavilion in 2017. Mike Brooks
This past week in North Texas, the biggest bang for your musical buck could be found Saturday night at Arlington’s Globe Life Field: Chris Stapleton’s All-American Roadshow. Before a scarcely masked audience of 40,000, a quartet of A-list country artists doled out roughly five hours’ worth of sonic riches. (Certainly, those filing into Globe Life Field got more for their money than the folks filling up AT&T Stadium next door, where the Dallas Cowboys stumbled through yet another preseason loss, this one to the Houston Texans.)

Saturday’s extravaganza was a bargain delayed in its delivery: Stapleton had initially scheduled his stop for November 2020, but the pandemic had other plans.

“How many of you bought this ticket two years ago?” Stapleton asked the room early in his set, to raucous cheers. “Well, here we are, finally.”

Stapleton’s set, a breezy 90-minute showcase, was a muscular reminder of how far he’s come in a pretty brief period of time. His last trip through town, in June 2018, was next door at AT&T Stadium — to that point, the list of artists who have performed at both Arlington sports monstrosities has to be extremely short.


Just six years ago, he was packing out Dallas bar City Tavern ahead of the Academy of Country Music Awards ceremony at AT&T Stadium. Now, Stapleton can stand center stage as an enormous tin can of a room sings his lyrics back at him full force.

If the Grammy-winning singer-songwriter was at all thrown by the scale, which included gigantic video screens flanking the stage tucked deep into centerfield, it didn’t manifest itself in the music. (That said, it was clear the impact a full stadium had, as he paused a few times to “take this in,” including snapping a photo: “I’m gonna take a picture of ya,” he said, lifting his digital camera up. “I’m gonna remember this moment.”)

With his wife, Morgane Stapleton, providing her otherworldly vocal accompaniment — the pair’s acoustic rendition of “Maggie’s Song,” from his latest record, Starting Over, was gorgeous and wrenching — and Mickey Raphael joining throughout on harmonica, Stapleton and his bandmates plowed through bluesy, folky, soulful tracks.

Highlights included the set opening “Whiskey and You,” and the scorching one-two punch of “Arkansas” and “Midnight Train to Memphis” — that are often classified as country on account of Stapleton’s pungent Kentucky accent than anything else.

It's mildly strange to think of such intimate, raw-nerved songs as being stadium fodder, yet Stapleton pulled it off, making the cavernous room seem cozier than its steel-clad surfaces felt. From first act to last, the sound system fought a mostly losing battle with the myriad hard surfaces inside Globe Life Field, introducing a vicious echo and loss of vocal and instrumental nuance inherent in every stadium concert experience.

There was no questioning the country bona fides of the evening’s penultimate act. Willie Nelson, arguably the only name on the bill whose reputation befits such a massive space, walked on stage to a standing ovation.

The 88-year-old Texas icon settled onto a stool, strummed the opening chords of “Whiskey River” on his well-worn guitar named Trigger, and the scent of marijuana seemed to arrive instantaneously. It felt, as much as anything can in these upside-down times, both unifying and liberating.

Apart from the stool, which Nelson perched upon throughout the hour-long set, there weren’t any other apparent concessions to aging, unless you count the number of songs on which his son Lukas Nelson took lead vocals. Seated alongside him, Lukas kept a watchful eye on his father all night, leaning in to harmonize or take the band through covers (Stevie Ray Vaughan’s “Texas Flood,” Kris Kristofferson’s “Why Me”).

Nelson, making his first local appearance in over two years and visibly coughing at several points, roused to life in spots; “Roll Me Up and Smoke When I Die” followed by “Still Not Dead” was a highlight, as was the unbearably poignant sight of father and son trading verses on Pearl Jam’s “Just Breathe” — but often seemed to be at something of a low ebb.
click to enlarge 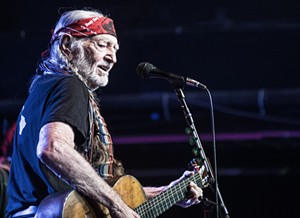 Willie Nelson playing at Billy Bob's Texas in Fort Worth, a frequent tour spot for the country icon.
Mike Brooks


Regardless, it remains a joy to bask in Nelson's presence and be reminded of the extraordinary durability of his classics (“On the Road Again,” “You Were Always on My Mind” and “Still is Still Moving to Me” were aired out Saturday). He’ll be back in our neck of the woods in November, playing the considerably smaller Billy Bob’s Texas.

Jamey Johnson’s 35-minute set was as direct and satisfying as his flinty, deeply felt songs. The singer-songwriter easily filled the enormous space with cuts like “Keeping Up with the Jonesin’,” “Between Jennings and Jones,” and his smash hit “In Color,” which he turned into an extended sing-along with the crowd.

Johnson, backed by an octet of musicians that included a trio of horn players, capped his time on stage with an appropriately rowdy tribute to the recently deceased Tom T. Hall, tearing through “Faster Horses (The Cowboy and the Poet)” with palpable enthusiasm.

British singer-songwriter Yola, whose last visit to North Texas, in February 2020, found her at the Kessler Theater, worked through most of her just-released sophomore album, Stand for Myself, during her dynamic 30-minute performance. (If you were stuck in traffic and missed out, Yola will be back in March, headlining Deep Ellum’s The Studio at the Factory.)

Confidently stepping up to the challenge of filling such a huge room with her vivid blend of folk, country, soul and pop (the punchy take on her single “Diamond Studded Shoes” nearly lifted the roof off), Yola firmly set the tone for what was to come. Call it an early confirmation of this night being both money and time well spent.
KEEP THE DALLAS OBSERVER FREE... Since we started the Dallas Observer, it has been defined as the free, independent voice of Dallas, and we'd like to keep it that way. With local media under siege, it's more important than ever for us to rally support behind funding our local journalism. You can help by participating in our "I Support" program, allowing us to keep offering readers access to our incisive coverage of local news, food and culture with no paywalls.
Make a one-time donation today for as little as $1.

Preston Jones is a Dallas-based writer who spent a decade as the pop music critic for the Fort Worth Star-Telegram, where the Texas Associated Press Managing Editors honored his work three times, including a 2017 first place award for comment and criticism (Class AAAA). His writing has also appeared in the New York Observer, The Dallas Morning News, the Houston Chronicle, Central Track, Oklahoma Today and Slant Magazine.
Contact: Preston Jones