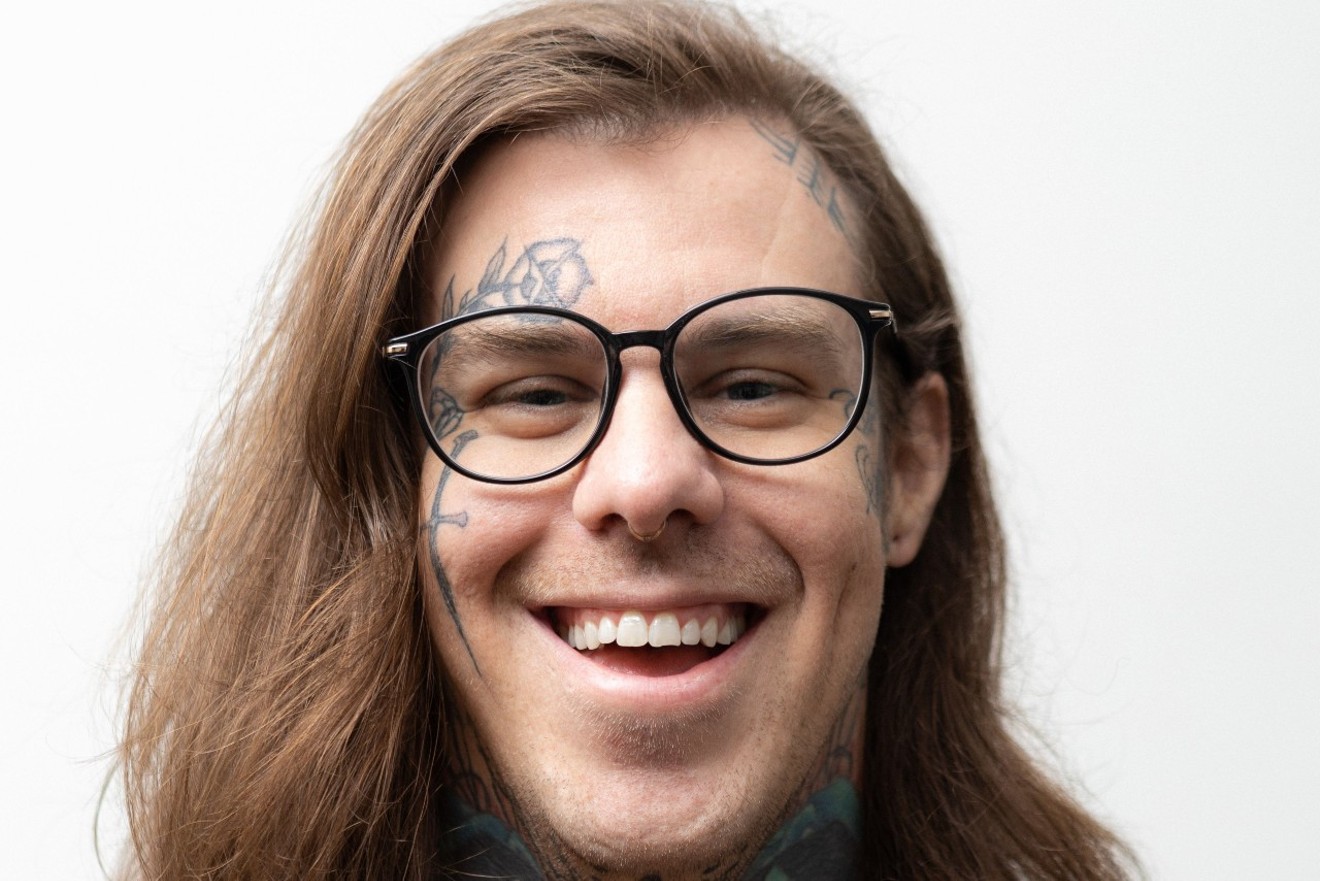 Bryan Kirks
Shayne Smith started doing comedy at the age of 28 after about four years of taking on crappy jobs during his time on probation. The decade before, however, was a wild ride of violence, robberies and face tattoos.

Smith has talked about all this before in his past specials for Dry Bar Comedy, an online comedy series based out of Smith’s home state of Utah that airs clean comedy routines, but he plans on going deeper into the stories he has only hinted at, on his current Banned From Karate Tour, which makes a stop Oct. 21 at the Addison Improv.

“On this tour, the materials are more autobiographical,” Smith says on a phone call during a much-needed break in his packed tour schedule. “I think both [Dry Bar Comedy] specials are very heavy on storytelling, but this one is much less small digestible pieces and is much more like a whole entire cohesive piece that has a beginning, a middle and an end. I hesitate to use the term one-man show because I think it's kind of lame, but it definitely is more cohesive.”

Drawing inspiration from the comedic storytelling of Kevin Hart, Anthony Jeselnik and Mike Birbiglia, Smith’s decidedly unclean comedy tour is a big step for the comedian, who has long been too hesitant to speak about his past gang activity.


“When I first started doing comedy, I didn't want to alienate people, I didn't want to get in trouble and I didn't want people from my past to get mad at me,” Smith says. “Since I've done comedy and gotten more popular, I've had the opportunity to reconnect with lots of people who I've talked about, and I realized that audiences are interested in authenticity, even if it's uncomfortable. Now my stories are much more full of my past.”

In Smith’s first comedy special Prison For Wizards, the comedian tells the story about working as a counselor for “troubled youth” with a man from his past known as “Angry Anton,” who is more heavily tattooed than Smith and definitely more aggressive. The story goes that the two thought they were being asked to do a “Scared Straight” program when, really, their audience was a bunch of church kids who had gotten in trouble for not paying attention in Sunday school.
“I talk about some encounters with my friend Anton,” Smith says, not giving too much away about his routine. “I talk a lot about my childhood and what it's like growing up being just like a white trash trailer kid from the middle of nowhere. I talk about growing up with three brothers and the fighting and all that leads up to the gang activity. … I also tell the story about being banned from karate, which ties heavily into me living that lifestyle at the time.”

Smith admits that “gang” is a funny word for all of the cultural weight it contains. In the past, Smith has made clear that being either a Crip or a Blood is not how gangs work and that the choice of being in a gang is often made without the participant’s knowledge. It is only later that one realizes they are actually in a gang.

“I just use ‘gang’ as, like, a catchall,” Smith says. “I guess people in street gangs who are, like, in the cities would call it gang-banging or whatever, but we never referred to ourselves that way. We were all of the same group and we're up to a lot of similar things.”

Thanks in part to government programs and volunteer work such as speaking to “troubled” church kids, Smith was able to escape the life that he'd found himself leading.

“Of course, they're like, ‘You should snitch,’ and then you go, ‘No, I'm not going to do that,’” Smith recalls. “Then they put you in a program help you remove your tattoos (if that's something you want to do), help you get a job, and the city I was in at the time had, like, a pretty decent gang rehabilitation program. I was already in trouble for certain things, and so I bit the bullet on those things."

"I'm being purposefully kind of vague about this, obviously," he adds.

With his past safely behind him, Smith's future is looking bright. As soon as he wraps up this tour, he plans on recording his next special and a full album with his metalcore band Painted Devils, continuing his podcast Cowboy Boys, developing a board, building a skate park and keeping his Twitter game solid.

“I'm pretty cynical about my own career,” Smith says. “It never feels like it's going as good as people say it looks like it's going, but I mean, it feels like things are going pretty well.”
KEEP THE DALLAS OBSERVER FREE... Since we started the Dallas Observer, it has been defined as the free, independent voice of Dallas, and we'd like to keep it that way. With local media under siege, it's more important than ever for us to rally support behind funding our local journalism. You can help by participating in our "I Support" program, allowing us to keep offering readers access to our incisive coverage of local news, food and culture with no paywalls.
Make a one-time donation today for as little as $1.

David Fletcher writes about music, arts and culture for the Dallas Observer. You can usually find him at a show in Deep Ellum whether he's writing about it or not. A punk scholar and local music enthusiast, David focuses his attention on the artists screaming in the margins of Dallas' music scene.
Contact: David Fletcher

Don't Miss Out
SIGN UP for the latest arts & culture news, free stuff and more!
Join Today
Sign Up
Become a member to support the independent voice of Dallas and help keep the future of the Observer FREE
I Support