The Best Things To Do in Dallas August 11-17

Catch a game with the Harlem Globetrotters on Saturday. Mike Mezeul

Tony Rock
It’s got to be hard being the sibling of a famous comedian while trying to earn comedic credibility of your own. But that’s what Tony Rock, younger brother of Chris Rock, has done with his career. The younger Rock has enjoyed a successful acting and stand-up comedy career for almost two decades, best known for playing Uncle Ryan on Everybody Hates Chris. See him live at Arlington Improv (309 Curtis Mathes Way) for a three-day stint starting at 8 p.m. Thursday, Aug. 12. Tickets are sold by table and start at $80. For more information, go to ticketweb.com

The Great 30
The Elevator Project, a curation of work presented by the AT&T Performing Arts Center (2403 Flora St.) including various disciplines, will host The Great 30 Thursday, Aug. 12-15. According to the company's website, The Great 30 is an “interactive, site-specific dance performance” that will take place throughout the arts center’s campus. As the dancers make their way through the performance, audience members will occasionally move along with them, learning exercise techniques and poses. The first performance starts at 6 p.m. Tickets are $29.50 at tickets.attpac.org.

Surfing inside sounds so much more fun than in the ocean.
Roderick Pullum

Flowapalooza Festival
Surfing sure looks fun — besides the shark-infested, deep ocean part of it. Perhaps you'd also prefer to rip some curls in the cool comfort of air conditioning. Either way, the Epic Waters Flowapalooza Festival has all the surfing fun you want under one roof. Featuring a FlowRider, the world’s first surf simulating machine, this three-day fest includes live music, carnival games, immersive activities, food, drinks and door prizes. Join in the fun or watch as professional FlowRider competitors show off their surfing tricks in the sport’s national and world championships starting Aug. 13 at Epic Waters Indoor Waterpark (2970 Epic Place, Grand Prairie). Three-day ticket packages range from $70 to $150 and can be purchased at epicwatersgp.com.

Spinning in the Clouds
Get your head in the clouds for a weekly summer series at Reunion Tower (300 Reunion Blvd. E.) offering live music and, towering 561 feet in the air, one of the most anxiety-inducing views of downtown Dallas. The cocktails on hand at Spinning in the Clouds might help with that, though. DJ K-Sprinkles spins tunes this week starting at 7 p.m. Friday, Aug. 13. The event is free with admission to the tower, which ranges from $9 to $23. More information is available at reuniontower.com.


Free Play Arlington ’90s Night
Nineties nostalgia will never die, even though it was a decade that gave us regretful trends like Jncos, the Macarena and Surge. But let’s all try to remember the good times, and the good music, at ’90s Night at Free Play Arlington (400 E. South St.) with DJ Terminator Mike B at 9 p.m. Friday, Aug. 13. Tickets are $12 and include access to an impressive lineup of arcade games, and anyone through the door from 9 to 10 p.m. will receive a ’90s inspired “party bag.” 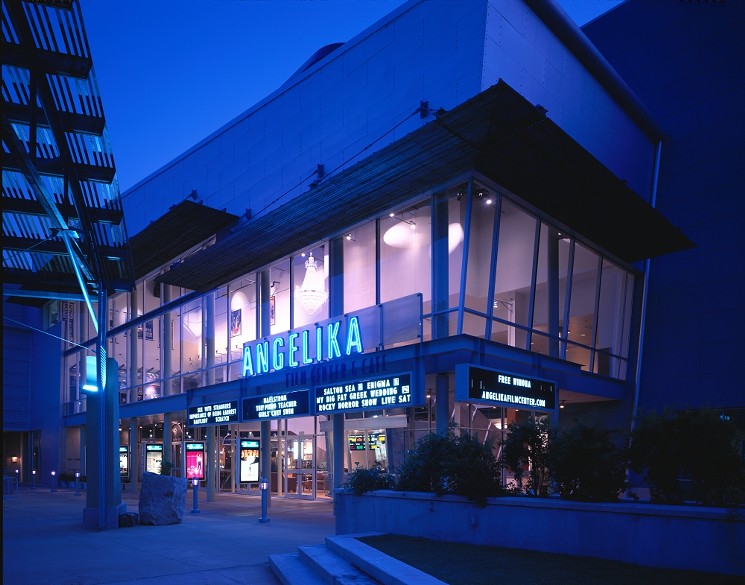 Angelika Film Center presents Studio Ghibli Festival
In celebration of Academy Award-winning director Hayao Miyazaki, Angelika Film Centers in Dallas and Plano will host its annual Studio Ghibli fest throughout the month. Miyazaki is known for his beautifully animated films with inspiring stories such as Kiki’s Delivery Service and Spirited Away. This week, catch Princess Mononoke, the story of a young girl raised by wolves who fights for the safety of her forest home and the spirits that dwell inside. Angelika Film Center Dallas (5321 E. Mockingbird Lane) will screen Princess Mononoke at 11 a.m. Saturday, Aug. 14. For a complete list of all films and screening times, go to angelikafilmcenter.com.

The Harlem Globetrotters Spread Game Tour
If the recent reboot of the classic ’90s basketball movie, Space Jam: A New Legacy, has your kid hyped about the sport, the Harlem Globetrotters Spread Game Tour is the place to be on Saturday, Aug. 14. American Airlines Center (2500 Victory Ave.) will host the Globetrotters, who combine athleticism, comedy and theater into their games and create a unique experience the whole family can enjoy. Catch one of two games, 2 p.m. and 7 p.m. Tickets start at $23 at Ticketmaster.com.

SpongeBob SquarePants: The Broadway Musical
If you want to feel old this week, take your kids to see SpongeBob SquarePants: The Broadway Musical at the Majestic Theatre (1925 Elm St.). The cartoon that essentially babysat kids in the early 2000s is now entertaining those kids’ kids, but on stage and with a bunch of Tony Award nominations. The theater will host two showings at 2:30 p.m. and 7:30 p.m. on Saturday, Aug. 14. Tickets are $28 at tix.com.

The late, great author Larry McMurtry is celebrated this week as the Modern Art Museum of Fort Worth screens the classic The Last Picture Show.
Daniel Rodrigue


The Last Picture Show 50th Anniversary
In celebration of the works of the late Western writer Larry McMurtry and the 50th anniversary of the film adaptation of one of his most famous novels, The Last Picture Show, the Modern Art Museum of Fort Worth (3200 Darnell St.) will screen the film with guest host and Fort Worth Star-Telegram journalist Bud Kennedy. The 1971 film stars Jeff Bridges and Cybill Shepherd and earned a spot in the United States National Film Registry thanks to its brilliant performances and cultural significance. See the show at 2 p.m. Saturday, Aug. 14. Tickets are $10, $8 for Modern members and $7 for Modern Reel People members. Go to themodern.org for more information.

Tacarra Williams
Tacarra Williams plays Addison Improv (4980 Belt Line Road) this week. Her blossoming comedy career has so far earned her spots on several New York and Hollywood stages, but her talent doesn’t stop at the microphone. Williams is a life skills coach for inmates and a powerful figure in the world of plus-size modeling. Her nuanced professional life gives her plenty of material for her stand-up comedy. Catch her show at 9:30 p.m. Saturday, Aug. 14. Tickets, at ticketweb.com, start at $20.

Lola’s Rock 'n’ Roll Rummage Sale
If you can stand the heat, outdoor markets are a lot of fun. And the Rock ‘n’ Roll Rummage Sale at Lola’s Trailer Park (2735 W. 5th St.) at 12 p.m. on Sunday, Aug. 15, has all the fun with over 40 local vendors, live music and food trucks. It’s Fort Worth’s longest-running outdoor market and features artists of all stripes and vintage collectors. Admission to this rain or shine event is free and dogs are welcome.
KEEP THE DALLAS OBSERVER FREE... Since we started the Dallas Observer, it has been defined as the free, independent voice of Dallas, and we'd like to keep it that way. With local media under siege, it's more important than ever for us to rally support behind funding our local journalism. You can help by participating in our "I Support" program, allowing us to keep offering readers access to our incisive coverage of local news, food and culture with no paywalls.
Make a one-time donation today for as little as $1.

Don't Miss Out
SIGN UP for the latest arts & culture news, free stuff and more!
Join Today
Sign Up
Become a member to support the independent voice of Dallas and help keep the future of the Observer FREE
I Support